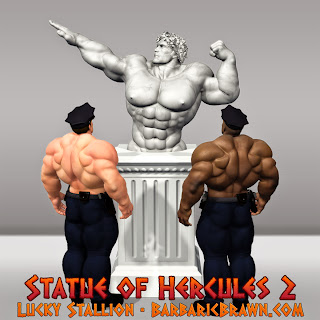 Hey, guys!  I wanted to take a little break from the Cold War wrestling story and do something I'd been thinking of trying recently: another statue of Hercules!

Accidentally damaged during the great events of the Trojan Horse that allowed the Greeks to flood the city of Troy, the legs of the beautiful Statue of Hercules were broken when Odysseus dodged the swing of a mighty war hammer.  When the conflict was settled, the great king of Ithaca returned the remains of the stonework to his home for safekeeping.

Thousands of years later, it now sits in the Museum of Ancient Muscle, where those who enjoy men with big muscle come to marvel at the sculptures of their ancestors.  Officers Ronnie and Ken stand in awe before the huge work of marble, paying homage to the demigod who inspired them to be the men they are today.

Today is Memorial Day in the US, and I want to send my deep thanks to all of our armed forces both past and present.
Posted by Lucky Stallion at 3:15 PM