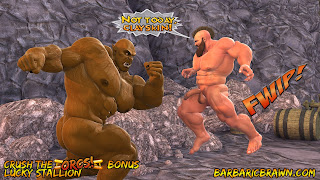 Urahg moved quickly, but Remgo was ready!  He leapt back and into the air, bellowing, "Not today, clayskin!" landing untouched steps away from the confused orc.

The brown orc couldn't understand how the dwarf, who he'd figured to be exhausted by now, could have managed to evade his devastating blow! 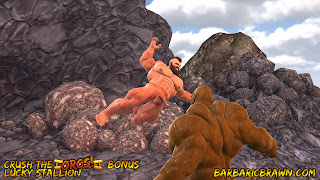 The little dwarf squatted down low, building energy in his mighty legs.  He gritted his teeth and jumped high, pulling his right leg back.  Urahg looked up in time to see the aggressive dwarf's acrobatic attack!  The hulking orc, unable to mount a quick enough response, could only look on with an expression of horror on his face! 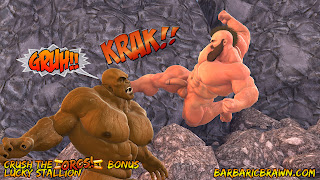 Remgo kicked with everything he had... and landed the blow against the orc's head with a loud KRAK!  Urahg bellowed in pain, his massive head pushed to the side and his senses knocked clean from him!

Remgo twisted his body in time to land on his feet, mere inches away from the orc.  Sweat flew from his head as he cocked his head upward to see what condition the brute was in. Urahg was in no condition to fight back, the dwarf could tell.  The big, brown musclebeast staggered in place, somehow (Remgo really wasn't sure) able to stay on his feet!

Remgo squatted down and grabbed the sweat-laced leg of the wobbly orc.  If he could only topple the giant over, he stood a chance of claiming victory for the dwarves!  Urahg's leg alone must've weighed as much as the entire mountain, the little dwarf thought to himself, straining every muscle in his body to bring his enemy down.

"SPIRITS!" he cried out to his ancestors.  "GIVE ME STRENGTH!!" 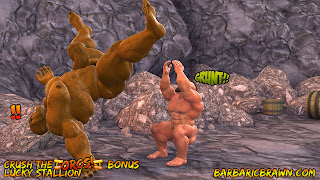 As if to answer the young dwarf's prayer, a surge of energy flowed into Remgo's arms, giving him the strength to lift the mighty orc up and into the air!  Urahg, shocked at the dwarf's power, could only make a yelp as his traps hit the hard ground!

Remgo stood and bounced his big pecs before shooting a double bicep pose to the sky, thanking the dwarven ancestors for their help. 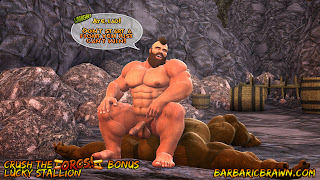 Remgo was exhausted, yet exhilarated with the outcome of the fight.  He felt confident of his fast-approaching victory!  The little humanlike creature strutted over and around the fallen orc and took his seat upon the clayskin's ugly face.  He wriggled his hips to make sure his cheeks spread apart.  He could feel Urahg's breath touch his hole -- the very hole that the orc had wanted to bury his cock deep inside.  The feel of his enemy's mouth against his most private area caused the dwarf's cock to stiffen and rise! 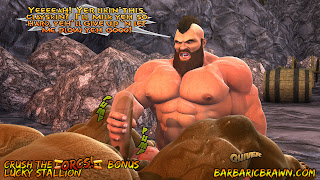 Remgo stood just as Urahg began to growl.  The orc was far from surrendering.  But that was okay, Remgo thought.  He would break the orc in time.  If not by pain, then by pleasure.

The dwarf kicked the orc's legs far apart and took his place on the ground between them.  He grabbed Urahg's big balls in his hand and gave them a tug, causing the orc to groan in pleasure.  The big brute's shaft rose to full attention.

Remgo let go of the seed-filled balls and grabbed hold of his enemy's cock.  His ministrations of the shaft began slow, stroking the meat up and down with delicate movements designed to drive the orc wild with desire.

Urahg squirmed and quivered in heat.  How could this be, he thought with horror!  This pathetic creature was giving him such pleasure!

Urahg wanted to shout against such abominations!  It was he who would plow the dwarf full!  It was his kind who would fuck every lesser being in the world into submission!

...But he couldn't help himself.  He spread his legs wider and allowed the dwarf to jack him to orgasm! 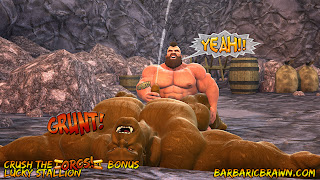 "YEAH!!" Remgo shouted, laughing as the orchood wasted its seed!  The splatters of orc cream came falling down onto Urahg's rapidly rising and falling belly. 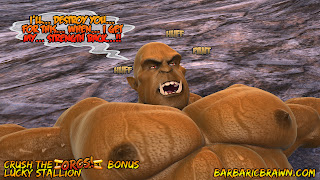 Remgo paid no attention to the empty threat.  The orc was finished and both of them knew it.  The dwarf took his time in examining an orc's cock up close.  He grinned and massaged the head, making Urahg cry out with the sensitivity. 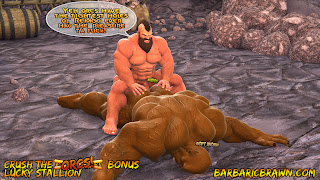 The dwarf flipped his conquest onto his belly with little difficulty.  Urahg was thoroughly drained from the fight and the orgasm and knew it would be foolish to even try standing on his own.  He could feel the dwarf squat down over his backside and the feel of those humanlike hands upon his proud butt.

Remgo placed his drooling cockhead against the orc's puckering hole, nudging it as though demanding entry.  The orc's ass was tight, yet he could feel the hole surrendering to his touch.

"Yeh orcs have the tightest holes ol' Remgo ever had the pleasure ta fuck!" he teased, further shaming the proud orc. 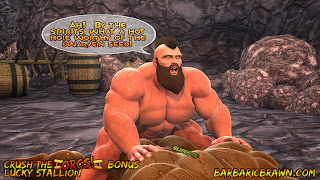 With his precum and sweat as lube, it was a simple effort to slide his penis into the orcish hole!  The dwarf groaned out in ecstasy as the soft folds of the orc's insides enveloped his cock with heat and pressure.

"Ah!" he grunted, pushing himself all the way inside.  "By the spirits, what a hot hole worthy of the dwarven seed!"

Remgo wasted no time in breeding his new bitch.  The dwarf held onto the orc's body as he began a simple fuck, thrusting in and out with a slow, steady rhythm. 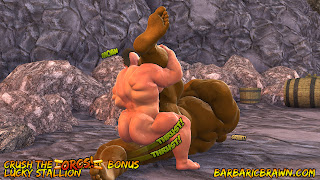 His confidence skyrocketing, Remgo grabbed hold of the orc's leg and turned him on his side!  The dwarf began a firm and fast pounding, thrusting his dwarfhood rapidly in and out of Urahg's quivering hole!  The orc grunted shamefully as his own cock hardened once more from the victory sex.  Remgo's cock slid quickly inside his conquest, filling the air with the sounds and smells of dwarf and orc. 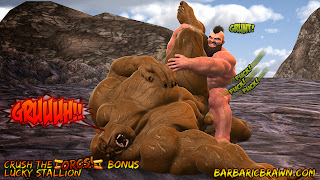 Remgo held onto Urahg's leg tightly as his pace hastened.  His cock throbbed and bounced inside the orc, spurting ropes of precum into the brute's butt.  The two muscle studs' bodies slapped together with every fuck of winner into loser.  Urahg's insides burned with a fire he'd never known before.  His fanged mouth opened wide and he howled out in passion as his pint-sized master bred his backside! 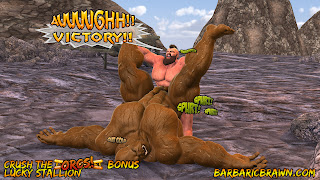 Sometime later, Urahg orgasmed once more and fell into a deep slumber, completely at the mercy of the dwarf.  Remgo sensed this, but didn't let up.  He wouldn't allow the orc's weakness to rob him of his rightful victory fuck!

On his back with his legs spread wide, Urahg's hole was skewered only seven more times before Remgo, too, succumbed to the heat between his thighs!  The dwarf's cock bounced and spurt countless ropes of hot, salty seed deep into his fallen foe, marking him as his slave!

"VICTORY!!" the dwarf cried out to the sky through a bellow and a shudder! 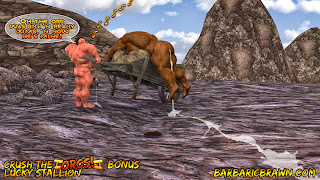 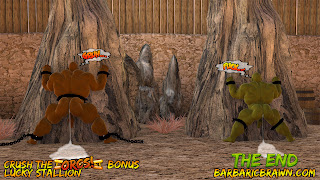 Remgo arrived a hero to the city of the dwarves.  He was told of how the orcs tried to fight them into submission, only to wind up enslaved themselves!  Several dwarf laborers lifted the clayskinned behemoth from the wheelbarrow and carried him over to the slave pens, where he was chained and cuffed facing the prison rock.  Next to him was another orc they'd captured only an hour before Remgo returned.  The short orc gave up his name -- Little Zug -- when threatened with a finger fucking from the brawniest dwarf in the city.

Remgo downed a big swig of grog as he recounted his fight with the big orc -- though his version, of course, was a bit more glorified than what actually happened.  One after another, the dwarves who heard of Remgo's victory wanted to have their turn fucking the orc named Urahg.

He and Little Zug would receive well over 200 loads from each of the dwarves -- as well as the dwarf king himself -- before they were allowed a bit of respite.  Unable to move from their spots, the orcs could only rest their heads against the prison rocks and grunt their frustrations with the way things turned out.  They turned their heads to see six naked dwarves headed their way, cocks erect and leaking!  The dwarves' uproarious laughter overwhelmed them, and their holes twitched in anticipation.

The End
Posted by Lucky Stallion at 12:23 AM