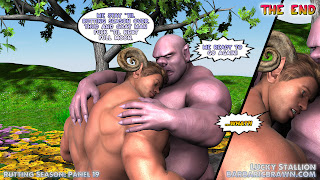 The ogre held his conquest close and took big sniffs of the satyr's hair.  It smelled like straw.  He grumbled contentedly and said, "Me stay 'til rutting season over.  Thud and goat man fuck 'til next full moon."

Keln could feel Thud's fat cock grow hard once again.  It pressed against his soft satyrhood and leaked generously over his shaft.

Keln's eyes snapped open and he grunted with surprise, "...What?!" 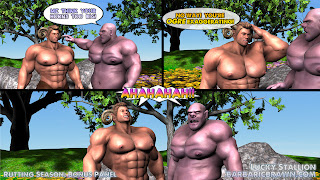 Keln stood still as he watched the ogre move around him, his face dangerously close to his own.  Thud then lifted a clawed finger his way and pointed to his left horn.

"Me think your horns too big!" the brute grunted bluntly.

Keln grumbled and ran his fingers across his spiral horn.  Sure, they were big, but not that big...

"No way!" he snapped back.  "You're ogre exaggerating!"

The two burst into a fit of laughter over the satyr's pun -- his corny, stupid, why-did-Lucky-Stallion-make-him-say-that pun.

I hope you guys enjoyed this quick battle between Keln and Thud!  I'll be taking a break for a while.  Keep a look out for my next posting!
Posted by Lucky Stallion at 11:39 PM