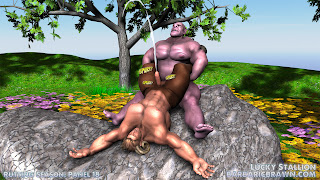 Satisfied that he'd made his dominance clear to his half-human opponent-turned-mate, Thud swung the satyr's entire body around and sat himself down upon the sun-baked resting rock.  With short, sharp thrusts, he finished his breeding of Keln, finally unloading his seed into the hole nestled between those furry cheeks!