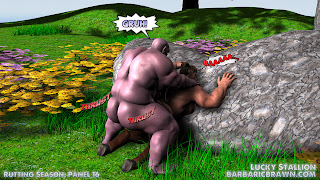 Thud placed his mate on the soft grass and mounted him from behind.  Keln's upper body pressed firmly against his resting rock as the victorious ogre's needy cock found its mark at his quivering hole.  The brute gave a deep grunt of satisfaction and penetrated Keln's final defenses!

The half-human moaned in bleats as his backside was taken roughly by the rutting ogre.  He could feel that fat meat stab rapidly at his butt as it worked to bury its thick precum inside, lubricating him for the ordeal.  Thud held onto Keln's muscular shoulders as he thrust himself deep inside his bitch.  His big belly rested on the satyr's furry butt cheeks as he pounded away at his backside.
Posted by Lucky Stallion at 11:59 PM