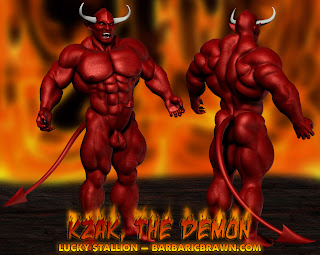 I was experimenting a bit with the glossiness and specular strengths of my guys when I decided to tweak my big, red demon stud.  The biggest changes I gave him are his new spear-tipped cock head and slightly-modified balls.  I think with that alone, he looks much better than his Version 2 form.

After giving minor updates to Hercules and Zeus, I decided to use this opportunity to make another mini story and share it with you guys.  I'm very happy with the way it turned out, and especially that I got to finally use Kzak in a prolonged story. 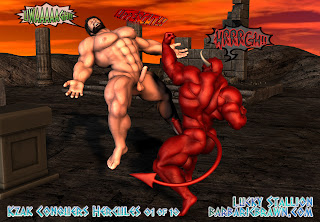 Hercules confronted Kzak, who'd recently enslaved his father, Zeus.  To bargain for his freedom, the king of the gods made a wager with the demon: if Hercules should defeat him, he was to release Zeus; but if Kzak were to triumph, both father and son would remain in the demon's fiery clutches!

Hercules had followed the sound of the demon's voice to the Underworld, a domain inhabited primarily by evil creatures.  He found Kzak awaiting him alone on a battlefield that was once an outpost of heroic men who had wished to reclaim the Underworld for the good guys.

"I know it was your trickery that brought upon the downfall of Zeus!  Release my father and return to him his powers, demon!" Hercules demanded, bouncing his proud pecs and standing his ground.

Kzak flicked his forked tongue at the demigod and laughed.  "You may have the old fool, Hercules, but only if you can best me in battle!  You know the price you will pay when you fail!" he shouted, leaping forward and engaging his opponent!

Demigod and demon battled ferociously, exchanging blows and holds, but in the Underworld, Kzak had an unfair advantage.  The fiery lands nourished the demon, allowing him to remain as strong and fresh as since the fight began.  Hercules, with all of his heroic strength and stamina, could feel himself fading.  His white toga, ripped to shreds by the fight, finally blew away in the wind, leaving him nude.

Kzak danced skillfully around his weakened prey, sending punches and kicks to every part of Hercules' legendary body.  Finally, drawing upon all of his strength for the finishing blow, the red-skinned demon sent a well-aimed uppercut into Hercules' jaw, forcing the stud into the air and the fight out of his body!

With a mighty, bearlike cry of pain, Hercules was at last conquered!  He fell to the ground and refused to get up to fight on.  Kzak placed his foot on the hero's abs and raised his arms high in victory!

With his son's defeat, Zeus had lost his best bargaining chip for a clean freedom, ensuring that both he and Hercules would remain slaves of the demon Kzak! 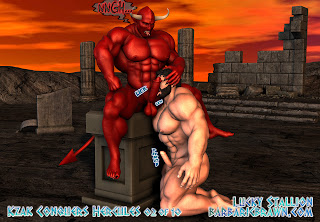 Obedient and humbled by his defeat, Hercules crawled on his hands and knees to his master.  He sat up humbly and, without a word, moved to service the cock of the victorious demon.  Kzak allowed the godling the honor of worshiping his cock.  He watched with great pleasure as Hercules slid his tongue up the throbbing red shaft.

The cock tasted salty to the son of Zeus.  Its flavor was much like that of the human men of the mortal world, but somewhat exotic.  Hercules' own manhood rose to full erection as he serviced the meat of the one he now called master.  Kzak's tongue flicked as he laughed at his new slave's eagerness to serve.  His manly hand stroked Hercules' black, curly locks, and his sharp claws gently scratched the skin below. 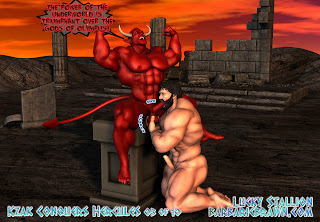 "THE POWER OF THE UNDERWORLD IS TRIUMPHANT OVER THE GODS OF OLYMPUS!!" an emboldened Kzak roared to the blood red sky!  With the enslavement of Zeus and Hercules, the hellish demon had grown more powerful as a champion of the fiery realm!

Hercules took the demonic cock between his godly lips and began a tender sucking.  His tongue slid along the curves and narrow tip of the head to pleasure the Underworlder.  Hercules reached up and took the heavy balls of his master into his hand.  As he weighed the hot orbs and gently massaged them, he was rewarded with a steady flow of sweet precum down his parched throat.  Hercules drank his fill from the demon's tap, and found himself craving the liquid by the time his lips were forced away.

Kzak was ready to fuck. 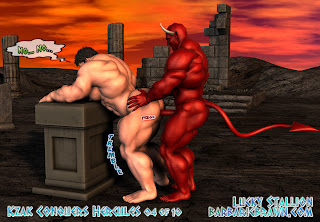 "No...  No..." Hercules moaned, hopeful that the trickster demon would have even an ounce of mercy to spare him the ritual victory fuck.  But Kzak would never allow this opportunity to slip away.  Hercules could feel the head of Kzak's fiery penis press insistently against his puckering hole, wanting nothing more than to gain entry.  Despite his words to the contrary, Hercules' body betrayed him and his pucker softened to invite the demon to use him as he wished.

Kzak felt the heat of Hercules emanate from around his hole as the narrow tip opened him up.  The soft, hidden flesh quivered at his touch, surrendering to him without a struggle.  The demon's mouth split into a wide smirk as even the legendary Hercules succumbed to his powers of seduction. 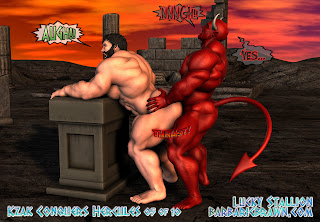 Finally, after minutes of agonizing teases, the horned Underworlder had fully penetrated his new slave!  Hercules' inner muscles massaged and squeezed at the throbbing invader.  The pressure around his cock felt incredible -- perhaps even better than Zeus himself!  It was exactly what he envisioned happening.  He had entertained Zeus' naive wager, knowing that Hercules would meet more than his match in the fiery domain.  Without realizing it, Zeus had foolishly sacrificed his own son to join him in his time as a slave in the Underworld!

"Nnngh!!  Yes..." Kzak moaned, allowing Hercules a moment to adjust to his massive girth.  The godling had taken countless cocks from many different creatures over the course of his life on the earth, but this demon's was easily among the biggest.  The cock not only filled him completely, but the skin all along the shaft emanated a burning sensation that felt like live coals were smoldering inside him. 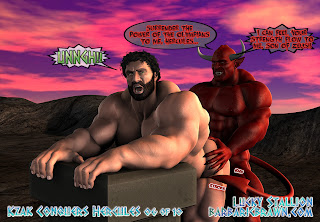 Kzak's tail ran alongside Hercules' trembling, muscular thighs, slowly stroking the Olympian like a master might comfort his slave.  He slowly pulled his cock out to its flared head, only to shove it back in again!  Without the resolve to fight back, Hercules could only scream in shock and endure the pain.  He held on to the charred stone post and cried out as the demon plowed away at his muscular butt.

"Surrender the power of the Olympians to me...  Yes...!!  I can feel your strength flow within me, son of Zeus!!" Kzak roared.

Hercules couldn't believe it, but it was true -- he felt his godly power being siphoned away by the demon!  Although his human half remained muscular and proud, the loss of his superhuman strength made him feel like a newborn babe in comparison.

Hercules' grunts and groans, however, soon turned to moans of pleasure.  Every thrust into his burning hole drove him closer to the edge.

His thoughts wandered as the red stud dominated him from the inside.  He wondered if Kzak had plowed his father, Zeus, in the same way.  His cock throbbed and bounced as he thought about the demon fucking the king of the gods like a common bitch. 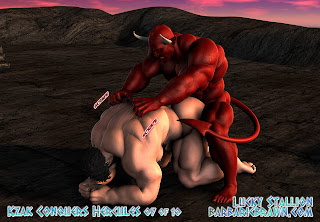 The stone post was toppled over as Hercules was forced to the ground.  Kzak sped up his breeding of the defeated son of Zeus.  His hips thrust wildly forward and back, plunging his heavy cock deep inside Hercules' well-lubed hole.  His big balls slapped dominantly against Hercules', reminding the loser of their new relationship.

Hercules lowered his head in shame and whimpered quietly as his body enjoyed the fuck.  Only a few other males had ever managed to bring the mighty Hercules to his hands and knees and moan with the heat that only two men can know.

Kzak raked his black claws along the godling's back, leaving burning lines across his flawless flesh.  The demon's tail continued to rub and stroke at his sore lower body.  Several times it ran across Hercules' throbbing cock and balls, teasing them slowly and unmercifully. 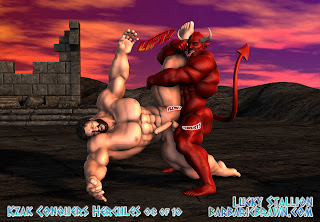 In a display of his new supreme power, Kzak grabbed Hercules' leg while remaining buried within him and flipped him onto his side!  He lifted the heavyweight halfgod up high and began a power fuck while Hercules cried out in fright and flailed over the ground!

Kzak laughed uproariously and kept Hercules' beefy thigh close to his muscular body.  The two males' flesh slapped together loudly as the more dominant partner made his power be known once again. 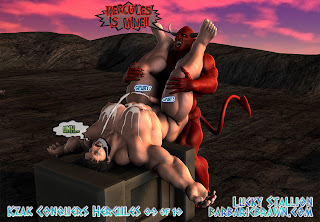 The demon laughed quietly and lifted his newest slave into his arms.  He carried him to the center of the field and dropped him onto the charred ground.  Hercules moaned and remained still, grateful that the ordeal was behind him.  The idea that he was going to be used in such a way countless more times hadn't yet occurred to him. 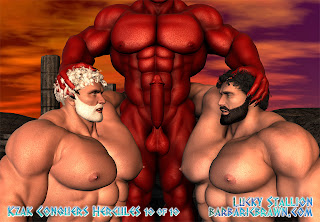 With the snap of his fingers, Zeus was transported from his cage hidden in Kzak's lair to the battlefield where his son lost the fight for his freedom.  Both Olympians were made to kneel before their master and gaze in awe at his magnificence.  Their holes twitched hungrily at the sight of his refreshed erection, each longing to be skewered by that demon cock once more.  Both knew that they would likely end up in battle with each other for the privilege to be the first upon it.

It would be a very, very long time before Kzak tired of Zeus and Hercules and cast them from his domain, back to the world above.  Because of their enslavement to the mighty demon Kzak, the god king and his son would forever desire the cocks of others to satisfy their well-used holes.  And although they would eventually regain their abilities, somewhere in the backs of their minds, they knew that they were not the invulnerable gods they imagined themselves to be.  Deep inside their bodies would forever linger traces of the dark seed of the demon known as Kzak, Conqueror of Olympus.

The End
Posted by Lucky Stallion at 10:17 PM