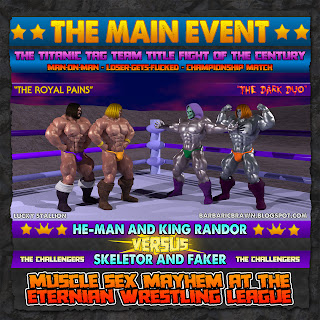 I was looking at some old professional wrestling promotional posters recently.  There's one of Hulk Hogan waving the American flag that reminds me a lot of the covers of old wrestling games I used to play (and still do!).  And the first WrestleMania promo with him and Mr. T is just awesome.  But as I went through a bunch of them, I couldn't help but notice how hokey and gaudy these used to be.  So, of course, I wanted to make my own!

This one stars He-Man and his beefy daddy, King Randor.  They're in the ring facing Skeletor and He-Man's strangely-colored doppelganger, Faker.  Our heroes here are the current tag team champions of the Eternian Wrestling League and have agreed to lay their titles on the line for this loser-gets-fucked match.  They named their group The Royal Pains (funny, huh?), while the two blue-hued bad guys have come together as The Dark Duo.

I'd like to think that King Randor would be cool enough to take his crown off, put a thong over his big prince-maker, and join He-Man in the squared circle to wrestle the villains that regularly threaten their kingdom.

Man, this poster is incredibly silly and flamboyant.  But even though I won't be making it into an actual story (at least not in the foreseeable future), I enjoyed putting it together for you guys. 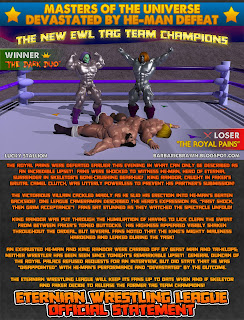 ...But wait!  The Eternian Wrestling League has just issued a statement on the aftermath of the match!  It appears that He-Man and King Randor have been defeated and stripped of their tag team championship titles!  The statement reads as follows:


The Royal Pains were defeated earlier this evening in what can only be described as an incredible upset!  Fans were shocked to witness He-Man, hero of Eternia, surrender in Skeletor's bone-crushing bearhug!  King Randor, caught in Faker's brutal camel clutch, was utterly powerless to prevent his partner's submission!

The victorious villain cackled madly as he slid his erection into He-Man's beaten backside!  One League cameraman described the hero's expression as, "first shock, then grim acceptance"!  Fans sat stunned as they watched the spectacle unfold!

King Randor was put through the humiliation of having to lick clean the sweat from between Faker's toned buttocks.  His highness appeared visibly shaken throughout the ordeal, but several fans noted that the king's mighty maleness hardened and leaked during the task!

An exhausted He-Man and King Randor were carried off by Beast Man and Tri-Klops; neither wrestler has been seen since tonight's remarkable upset!  General Duncan of the Royal Palace refused requests for an interview, but did state that he was "disappointed" with He-Man's performance and "devastated" by the outcome.

The Eternian Wrestling League will keep its fans up to date when and if Skeletor and Faker decide to release the former tag team champions!

That evil Skeletor!  Who knows what he and the other villains will do to He-Man and King Randor!
Posted by Lucky Stallion at 11:47 PM