Hey, guys!  Today is the blog's first anniversary online, and I wanted to give a big thank you to all of you out there who have been awesome enough to keep coming back or for sometimes leaving a comment.  I always appreciate them.

I started up this little muscle haven on the Internet because of my love of barbarians and their raw and rugged sex appeal.  Since then I've branched out a bit more and added more modern men to my lineup.

The first two characters I created for Barbaric Brawn were Tuskar and Kugo.  To celebrate this first anniversary, I thought it would be fun to give you guys a look at what these two studs were like in their prototype phase.

Since these pictures are very wide, you may need to open them in their own tab/window in your browser or download them to your computer to see them properly.

The story of Tuskar vs Kugo originally began with Tuskar (who was the original owner of the Axe of Legend -- which later became the Axe of Power) seeking adventure across the southern continent of Africa.  His exhaustive journey through the hot jungles eventually brought him to a tribal village of black men.  Hoping to seek shelter for the coming night, he entered.

But the chieftain, Kugo, and the big-bellied N'kaku protested his intrusion.  They would not allow outsiders from the north to stay in their domain.  Angered by their arrogance, Tuskar challenged the black men to battle!

Having wrestled and overwhelmed the white barbarian, Kugo and N'kaku soon defeated him and claimed him and his axe as prizes.  The wise man of the village recognized the Axe of Power and knew that his people would soon prosper with its rumored properties.

All of this was a bit too ambitious for me in the beginning, and because of tech limitations, the village and everyone but the titular fighters had to go.  Kugo's model was changed to be a clone of Tuskar's and a revised story was written.  Oh, and for some reason, I had originally called Kugo Nubios -- and then later Kgosi!  It was only days before I created Barbaric Brawn that I renamed him to Kugo. 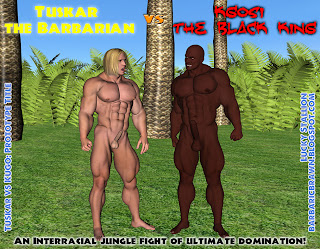 A bit of further work turned Tuskar and Kugo into what they eventually became.  Thanks for sitting through this bit of history with me.  I had fun going back to these pictures and looking at what things were like with this story a little more than a year ago.