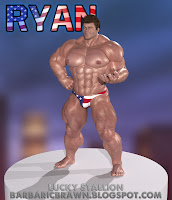 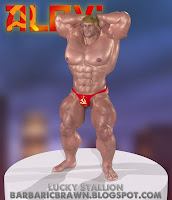 Ryan and Alexi stand proudly upon their platforms, giving a pose for their adoring fans.  Reporters for major newspapers from around the world have been called in to photograph the men for their upcoming match.

Both Ryan and Alexi sport a tight, hip-hugging thong printed with the proud flags of their respective countries.  On Ryan are the stars and stripes of the USA, while Alexi wears the hammer, sickle, and star of the USSR.

The wrestlers' beefy bodies have been coated with posing oil applied by one very lucky arena assistant.  Though the young buck is American, he can't help but feel in awe by the Soviet stallion's muscle.  The blond Russian bounces his pecs for the poor assistant, forcing him to flee the area to take care of the throbbing erection in his jeans.

This is basically another light test, even though I'm pretty much done with testing.  It took my computer about 18 hours total to render these, but I'm very happy with the results.  The story is still being worked on, so it won't be ready anytime soon.  I'm taking my time with it to make sure it comes out great.
Posted by Lucky Stallion at 11:46 PM