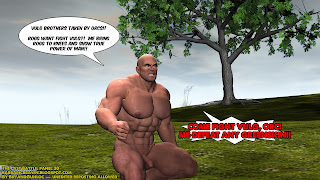 Vulg returned a look of malice to the orc.

"Vulg brothers taken by orcs!!" he shouted bitterly.  The thought made him sick and furious.  Men were the supreme beings of the world -- masters over the others!  To be enslaved by such a brutish race...  It was unthinkable!

The barbarian stood and assumed a threatening stance.

"COME FIGHT VULG, ORC!" he yelled, issuing his challenge.  "ME DEFEAT ANY GREENSKIN!!"
Posted by Lucky Stallion at 2:08 PM