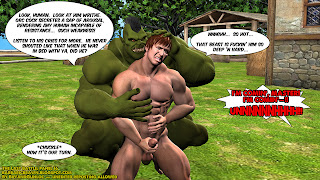 Gorg knelt behind the farmer and held his head, forcing him to watch the display unfold.

"Look, human," he grunted masculinely.  "Look at him writhe.  Orc cock secretes a sap of arousal, rendering any human incapable of resistance...  Such weakness!"

The man couldn't help himself.  He grabbed hold of his throbbing cock and began to stroke it.

"Listen to his cries for more," Gorg taunted, squeezing the human's pec and nipple.  "He never shouted like that when he was in bed with ya, did he?"

Gorg chuckled lowly.  "Now it's our turn."
Posted by Lucky Stallion at 5:52 PM