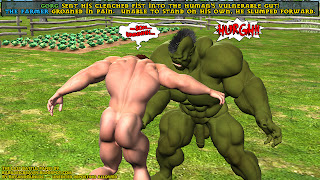 Taking advantage of his accomplice's distraction, Gorg stepped forward and sent his clenched fist into the human's vulnerable gut!

Unable to stand on his own, he slumped forward and into the powerful arms of the green invader.

Gorg held the human close to him, pinning his arms to his sides and rendering him helpless.

The orc smirked.  For all his threats and anger, the keeper of the farm was easily defeated.
Posted by Lucky Stallion at 4:13 PM