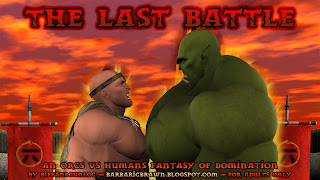 The Last Battle is an orcs vs humans original fantasy of domination.

The orcs of Grohmah have escalated their attacks upon the human kingdom of Brunnr.

Overlord Krag, declares to his orcs that the time of humans has come to an end!  They will be enslaved and the orcs will rule over the world!

Ranzen, King of Men, has had enough of the threats caused by Krag and his orcs.  He commands his men to fight for a brighter future and to subdue the greenskins.

Only when these things happen will they cement their place as masters of the Earth!
Posted by Lucky Stallion at 8:13 PM