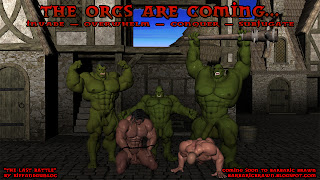 There's a chill in the air surrounding the human kingdom of Brunnr.

The orcs of Grohmah, a brutish race infused with muscle and power, have long fought with men for their land and resources.  The greenskins, led by Overlord Krag, desire to strip men of these priceless things.  Krag dreams nightly of subjugating them once and for all.

With the men under their control, the orcs will go unchallenged for total supremacy of the world!

The humans, led by King Ranzen, will fight to uphold humanity's honor and retain its place on the Earth.  Two of Ranzen's strongest warriors set out to not only fight back the threat caused by the orcs -- but to totally eliminate it!

The orcs challenge the humans to the final, ultimate struggle that will change their fates forever!

The Last Battle will soon begin!
Posted by Lucky Stallion at 12:35 AM