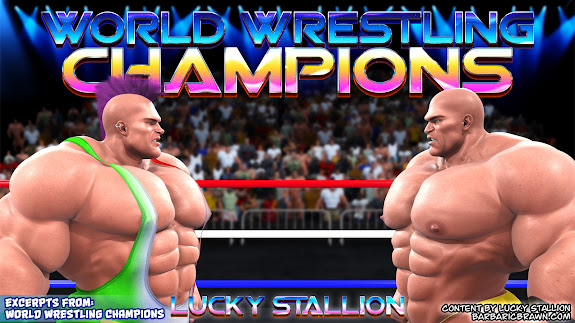 Hey, guys!  I wanted to announce that I posted a new PDF over at my Gumroad and Lulu shops.  This one is a pro wrestling story called World Wrestling Champions, which features Gorilla (as Australian Heavyweight Champion) facing off against a newcomer to my roster, Italian superstud, Gino Moretti.  Gino is the European Heavyweight Champion.

Gino greatly dislikes the way Gorilla wrestles, thinking the Aussie a bully and a brute.  He puts his title on the line to lure the smooth-headed wrestler into the ring to take his belt and humble him once and for all!

But Gorilla sees this as a golden opportunity.  With two prestigious belts in his possession, he would be in a better position to wrestle Alexi Volkov in a high-stakes match for the World Heavyweight Champion title!

This story has been enhanced from the Patreon version (from June of last year, and posted here earlier this year) with many new panels, an all new text story, and an alternate ending, giving your choice of champion the win over his foe!

Check out the previews over at my Comics Blog here, or you can use the links below to buy yourself a copy!  Thanks very much; I appreciate your support greatly!

Lulu Link
Posted by Lucky Stallion at 12:11 AM