Update: My Patreon page is live and launched!  I'd love if you took a look here: https://www.patreon.com/luckystallion

Hey there, guys.  I mentioned a while ago about maybe opening a Patreon subscription page after my (and all adult-oriented) Selz store was shut down.  I've decided to go through with it and have been working to prepare art for its two reward tiers. 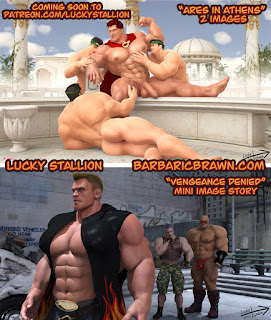 I'll have more details about it soon, but I wanted to show a couple of them here.  Ares in Athens is a first tier two image set (the second of which with Ares erect) with the god of war sitting in beautiful Athens and receiving worship from triplet brothers who can't help but to touch this hulking masculine deity.

For the second tier is Vengeance Denied, a mini image story (which is currently at 9 images and isn't quite done yet) about a man named Brad who is in search of his brother who was taken in the dark of the night.  He heads out into the mean streets and ends up meeting two rough thugs who want to add the blond stud to their growing list of conquests.

These works will eventually make their way to the blog, though after a long stretch of time for the subscribers to enjoy first and at a much lower resolution and more compression than on Patreon.  I'm hoping that this will be a success and, as always, I'll strive to make great work for you guys as thanks for your support.

There isn't much to see just yet, but the page will be open at https://www.patreon.com/luckystallion

Thank you very much!
Posted by Lucky Stallion at 4:14 AM