Golden Axe is one of my old favorites from my childhood.  Ax Battler is a studly barbarian on a quest to destroy the evil Death Adder and prevent him from conquering the world with the power of the Golden Axe.

It was only a matter of time before I tried my hand at a model of Ax, but I just didn't think what I made was good enough to attempt anything with, so I kept him in one of my many art folders for later on.  This was early in 2013.  A while later, after I had learned some new techniques in lighting, I went back and refreshed his model a little and version 2 is what he looked like after. 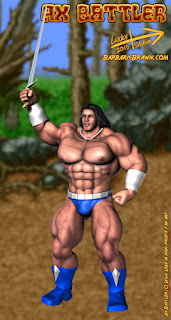 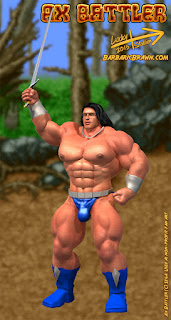 I'm still not very happy with it.  I made the belt from scratch and the necklace and diamond spikes on his boots are mine, also.  I had planned on making Death Adder's helmet, but my skills aren't quite at that point yet so he remains uncreated for now.

I'll almost assuredly return to the raven-haired stud at some point in the future, but for now, I just wanted to share him with you guys.
Posted by Lucky Stallion at 3:39 AM