Happy holiday season to you all!  I enlisted the help of my biggest orc daddy this year to help spread some good tidings to my visitors and fans of big muscle.  Don't let his grumpy expression fool you, he has a heart of gold and a lot of bone-crushing, man-breaking bearhugs to give out.

Take it away, Santa Krag! 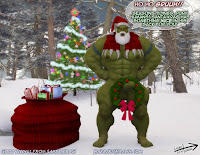 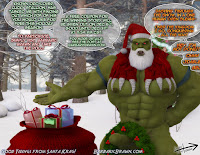 As an added treat, the second and third runners up will receive a 75% and 50% off coupon respectively.  You can vote in this poll only once, but can vote for as many options as you'd like to see gain a point.  Excluded from this promo are The Last Battle: Orc vs Man and Muscle Monsters.

Like Santa Krag said, this poll will be open until sometime during the 6th of December.  At that time, I'll generate the coupons and we'll all have a happy bone-crushing, man-breaking bearhug!  Thanks for your participation!

(Not sure what these comics are?  Check them out at my PDF eBooks page!)

I had to give a direct link instead of embedding it here due to a strange problem with the script redirecting people who visit here to its page.  Huge thanks to Alex for alerting me to the problem!

The poll is now closed!  Thank you to everyone for participating.  Keep a look out soon for the results!
Posted by Lucky Stallion at 2:42 PM 9 comments

Some time ago, I had wanted to open a YouTube account specifically for video game wrestling (and maybe some others in the future) that I'd make to share with you guys.  I had started by just posting still screenshots of a match to my deviantART page (direct gallery link here), but that isn't as fun as a video!

I finally went ahead and did it!  You can check out my YouTube channel here, and catch my first test video of Tarzan wrestling Conan the Barbarian here.
Posted by Lucky Stallion at 7:23 PM 5 comments

Ares Behind the Shrine

Ares has gotten a minor redesign for the remake of Hercules vs Sergios.  He's standing behind the shrine of his father, Zeus, listening to the ruler of Olympus appeal to Hercules.

The god of war's mouth spreads into a smirk and he chuckles softly to himself, knowing well ahead of time that his half-brother would be called upon to save Zeus from this dilemma.

All according to plan... 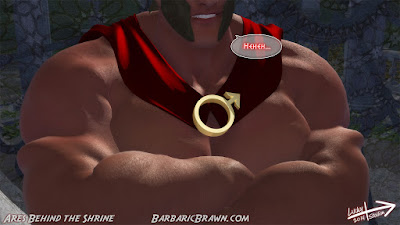 Happy Friday, all!  I've been getting a bit of work done on the remake of Hercules vs Sergios and have a work-in-progress of Zeus' shrine to share with you guys. 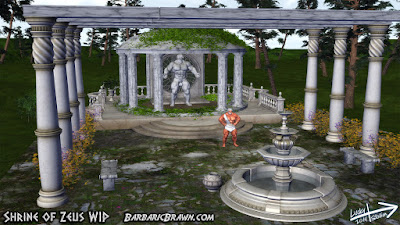 The original version (seen here) is quite a bit different than the new version I've nearly finished recreating.  Since he's the king of the gods, I wanted something much, much more grand for Zeus.  There are a few similarities to the original, with a water fountain, the ground, the pottery, the statue of Zeus, and the glass behind it.

I'll have more to tease in the coming weeks.
Posted by Lucky Stallion at 12:59 AM 4 comments

Hey, everyone.  I just finished uploading my newest pose packs for sale on Renderosity and thought I'd show the promo art I made for them here!

These are Barbarian Poses for the Freak 4, Michael 5, and Michael 6.  I went with a smaller pack this time (20 versus my usual of 50~), so it wouldn't be as painstaking and so I could get back to work on projects for Barbaric Brawn faster.

Up next, I thought that I would get started on a new PDF adaptation and I was thinking of tackling a total remake of Hercules vs Sergios.  Would that be something that you guys would be interested in?

I also have a special treat planned for December.  Stick around in the coming weeks for more info on that!

Take it easy, guys, and bundle up!
Posted by Lucky Stallion at 12:20 AM 8 comments

Howdy!  We're coming up fast on the weekend, and I wanted to make a post with a few updates going on.

I finished a commission from muscle artist Kensou Dojo (dA link; FA link) and he gave me permission to share it with you guys here.  It's of his original characters Dante (the bearhugger stud) and Lycaon with that fluffy, wolfy tail.  Dante's got Lycaon's butt plugged with his fat manhood and is spurting his dominant seed deep in there as the wolfish muscleman's own cock is squeezed to blasting. 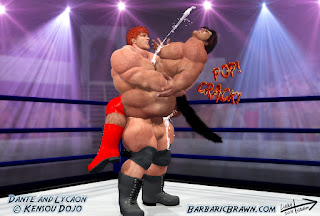 I've also been doing commission work for quite a while for the studly minotaur named Nightbully.  His first match is against Hercules and his second against my four-armed original character Brutus.  You can find his adventures (which are, fair warning, more brutal than the works I normally post here) at his new blog here or on his FA page!

I've begun work on a new pose pack -- this one involving barbarians.  I've decided to do a smaller pack this time (my previous packs were upward of 50; this one will be about 20) and to translate them to Genesis and Genesis 2 Male.  Some of those poses, like my newest Superhero pack will likely be used in future works here.

And finally, Barbaric Brawn is on Twitter!  Well, it's been on Twitter for a while now, I just never bothered to advertise it here in a post!  There's a little button in the side bar that'll take you there -- if you wanna follow me, thanks so much! -- or you can get there from the link here.  I haven't posted very much on there, but if there's ever a problem with the blog or whatever, that'd be a good place to check for more info.

One more thing: I'm also planning an old story remake for sometime in the next few months, and I have a nice surprise planned for December.  I'll see you guys soon!
Posted by Lucky Stallion at 12:48 AM 7 comments

I just finished with my latest spur-of-the-moment project, named after its protagonist, my new original character Dan Columbo.

I have a bit of a captured soldier fetish, so when I saw an advertisement for a Rambo marathon (that came on the other night), I decided to try my version of such a theme.  And Columbo was born!

This story is a little... rougher, I suppose you could say, than my usual stuff.  It depicts and describes somewhat rough treatment by his captors, but still mostly fits into the normal fantasy/cartoon violence work found here.  There's also a bit of tenderness near the end to help make up for the beginning.

I hope you enjoy it!  Here's Dan Columbo. 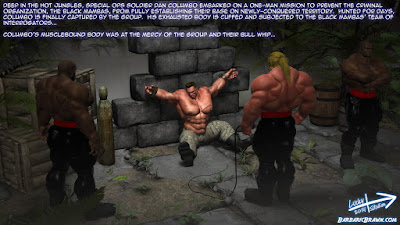 Happy November, home month of my birthday!  And, strangely enough, there's quite a chill down here in my part of Florida that came just today.

I had an unfortunate hard drive failure last night.  Thankfully not my main, but one of my storage drives.  I've been keeping backups (and backups of backups) for years now, but it still sucks to lose one, especially only a year and a half into its life.

I've always been adverse to do something like this (advertise myself for money), but I wanted to promote my commission page and get the word out that I'm open for them and ready to work.  There are also my PDFs that you can pick up to support the works you see here -- or if you'd like to donate to the blog, the 5 Pack Exclusive product at my Selz store will take any amount you wish in the price box.  Thank you so very much, I always appreciate you guys' support.

On the art front, I'm working on an image series about a special ops soldier captured by a criminal organization in the jungle.  I think I can blame Rambo for this one.  It'll be posted in the next day or two, I'm guessing.

See you guys soon!  Take care and have a great weekend.
-Lucky