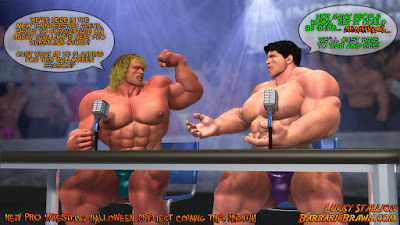 Hello to all of my muscle monsters!  I've been planning my next tale (a Halloween story) for a while now and am ready to post the teaser for it.  This one will feature entirely new characters in the new 360° environment I've spent some hours putting together to serve as the arena.  Gone are the blank backgrounds of light that I've used in the past; moving forward, there will now always be a massive crowd of men in the stands spread out behind the four barricades that surround the wrestling ring.

These two men sitting here are the new commentators for this fight.  The blond on the left is Jason "The Jackhammer" Jackson and his co-commentator is Big Ben Halstrom.  They were once pro wrestlers who left the federation to become professional bodybuilders and have agreed to lend their celebrity to the match's Main Event.

Keep a look out for this story coming in October!
Posted by Lucky Stallion at 6:59 PM