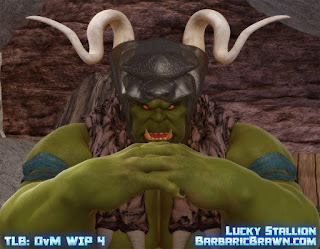 Bra'thor Krag is the overlord and ruler of the race known as the orcs.  He is the biggest and strongest of any living orc and rules over his studs with an iron fist.  Although he's hard on his orcs and takes no disobedience from them, he has their best interest at heart and will do anything to push their interests in the world.

Krag commands his troops from Grohmah, the capital city of the land that belongs to the tusked titans.  For years, Krag has kept his orcs safe from the humans, led by King Hurk, while he slowly amassed power and resources for the inevitable war against the softskins.

But one day, an orc scout named Ya'gor ran into his throne room with urgent news.  The scout told his overlord that Hurk had fallen in battle to another human.  This human, this new king, Ranzen, rose to power on the promise that he would destroy the orc threat and reclaim lands and resources that rightfully belonged to man.

Calm and collected, Krag sat upon his throne and pondered this new king.  He licked his tusks and grumbled lowly, menacingly.  He would be ready for King Alurad Ranzen.
Posted by Lucky Stallion at 2:05 AM