Hey, all!  How's everyone doing?  I hope that your weekends were great and that the next is even better.

I wanted to share what I've been busying myself with since coming back home from the hotel.  In between cleaning up and organizing around the house, I've finished work on a pose pack I'll be selling soon in another store.  I'm considering doing a version for Genesis 2 Male, but I'm totally new to saving those positions, so I'll need to research it a bit first. 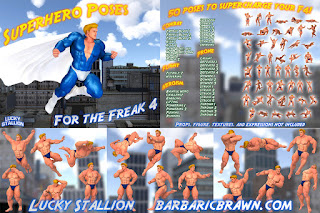 In the promos, I put this golden-haired superhero in just a set of briefs.  At first, I had him in his full suit like in the cover image, but it didn't show off the body poses as well as I had wanted, so I stripped him down and made him pose for me.

Putting it like that makes me sound like some kind of villainous mastermind. *...grin*
Posted by Lucky Stallion at 2:25 AM