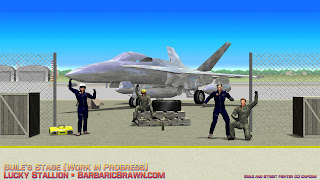 I'm getting ready to begin rendering the fight scenes, and I wanted to show you guys what I've got so far in terms of the stage.  I recently replayed Street Fighter II for a while to study Guile and his stage, and I think I have a pretty good version of the military base redone in 3D.

The far background is still the same -- I thought this would be a lot easier on me, as well as give it a little extra flavor of the game.  The worker observers are now in 3D and look a bit different, as well.  I did manage to keep the yellow radio.  I had to bring that over.  It's the most important detail, of course!

Some minor things may change here or there, but this is mostly complete!  The finished fight itself should be up sometime this week, so keep a look out for it!
Posted by Lucky Stallion at 11:21 PM