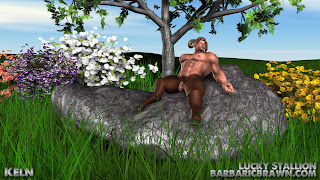 This is Keln, the satyr.  Keln is a bit of a nature boy -- well, very much a nature boy -- and can usually be found lounging about in a valley of endless grass or within a bed of sweet-smelling flowers.  But despite his fancy and overly-romantic tendencies, Keln has been known to become wildly aggressive when he spots anyone doing harm to the environment.  He gallops at speeds greater than a gazelle to bash the foolish ne'er-do-wells with his big horns, sending them to the ground in short order. 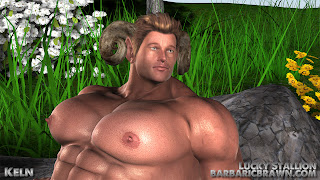 Oftentimes, the fanciful satyr will be in a mating mood, and it is then that he tends to punish the guilty with his thick maleness.  With a loud, caprine bleat, he unloads his balls-worth of semen into their bodies and leaves them exhausted to think about what they did.

Baaaa!
Posted by Lucky Stallion at 1:00 AM