Ra'zug at the Farmstead (WIP)

This is Ra'zug (formerly known as Zug or Little Zug), one of the smallest fully-grown greenskins in existence in the world of orcs and men.  I gave Ra'zug several minor changes in this newest version of his model.  Other than his name, the most notable change is the cluster of spiked, blood-red metal piercings he has in that handsome mug of his.

Like just about everyone else so far, he also sports a new loincloth that I've modified heavily with a custom texture and opacity map.  His loincloth is just a little too short and if you look closely, you can see his orchood dangling beyond it.  And if you look a little too closely, he'll beat the crap out of you!  Well... depending on his mood it may be something else he does, heheheh. 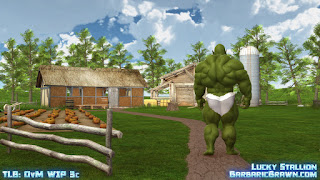 The story component is coming along nicely.  I've finished writing this farmstead part tonight and, in total, have about 60% of the text completed.  The majority of the work will come from building and rendering the imagery, however.  Well, back to work, then!
Posted by Lucky Stallion at 11:48 PM