Still suffering from the effects of the pink gas sprayed at them by bank robbers earlier that night, Batman and Superman steal a moment away from the other members of the JLA.  The robbers' tactics had proved a success, causing the two superstuds' trunks to tent lewdly.  Agonized by their rock-hard manhoods and embarrassed beyond comprehension, the heroes fled from the crime-in-progress and into hiding. 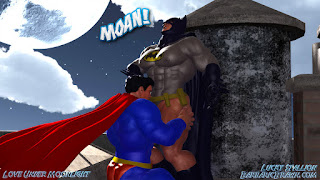 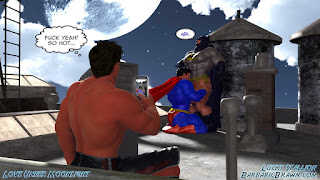 Hey there, everyone.  I'm finally back home and am working hard to get life back to normal.

When I left for the hotel, I thought I'd only be gone at most a few days, but it's taken over two weeks to be able to get back in again.  I had (thankfully) purchased a good, inexpensive laptop to help keep me busy (and sane) while I was gone.  I loaded it up with digital backups of some of my DVD collection, comic books I'd been meaning to read (I now have quite a fondness for Booster Gold -- old and new series), and OpenOffice to get some writing done.

I wrote out a couple of rough stories that likely won't develop into anything substantial, an original superhero character, a lot of the remake of The Last Battle - Orc vs Man, and the bios and a few paragraphs for a new pro wrestling story set in the world and time of Ryan, Alexi, and Gorilla.  That one involves a wrestler from England and one from Italy.  I'm currently developing that one alongside Orc vs Man.

I also brought my Wacom with me and practiced drawing a bit.  My drawing skill is... not great!  Ever since I was a little stud, I've had more of a pull toward 3D art, though line art has always held a special place in my heart.

Now to get back to work... after a good night's rest!  Take care, all, and thank you for thinking of me.  I missed you quite a lot.

P.S. -- The maintenance guy at the hotel (named Billy) I had to call on a couple of times was pretty hot.  Big, burly, bara guy with a bubble butt.  I wanted to grab it when he was installing the new shower head, but I didn't want to risk getting punched in the face.  Ah, real life...  That's why we have dirty stories!