Last night, my state was hit by a sudden and very strong thunderstorm.  It's currently moving very slowly to the northeast of the US, but not before dumping around 19 inches [update: the total was around 27" of rain] of water in my city and flooding my house in the process.

I managed to get my most precious things elevated in time, but there was a lot of water damage and loss that I'm having to cope with.  It was like a category 5 hurricane came through, but without the high winds.

My current projects for this site are undamaged, though a bit of a delay is sadly occurring with Barbarian vs Olympian.  I'll get back to work on it as soon as I can get things settled here.

I still can't quite believe it even happened.  Take care, everyone.  Stay safe.
Posted by Lucky Stallion at 4:33 PM 22 comments

Hey, everyone!  How are you all doing?  I've begun work on a new story that I originally teased back in July of 2012 (wow, time sure passes quickly).  I think you can probably guess pretty easily who the "Barbarian" is in this title. 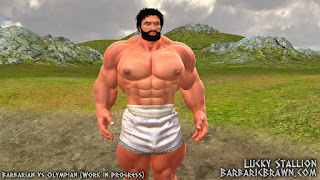 I just wanted to post a work-in-progress preview that has the basic battleground set up.  I'll be adding more and more details to it as I work on the story.  Keep a look out for it in the future!
Posted by Lucky Stallion at 2:21 AM 8 comments

Slab is one of SoupGoblin's oni original characters who I had the pleasure of working on late last year.  Slab is a bit thick in the head, but very powerful -- just the way I like 'em!  It was a very fun challenge to recreate this stud in 3D (like with Slake) and eventually see how he emerged in the end.

You can check out much more of Slab and SoupGoblin's other demon studs at the Stash and his FurAffinity page!
Posted by Lucky Stallion at 3:47 AM 3 comments

Mike Haggar stumbled out of the seedy fight club and onto the misty, grime-coated streets.  A former professional wrestler and new Mayor of Metro City, Haggar pledged to clean up the mess made of Metro and punish the punks who loomed large over the city's forces of justice.

Haggar clutched his bruised and aching shoulder and grunted through the pains accumulated through his previous encounter.  He'd just faced off against two of the massive Andore brothers.  In that square cage with the Andores, he was surrounded by 100 men, eagerly placing bets on who would wind up on a stretcher.  With the ferocity of a bear, Haggar had managed to punch, kick, and piledrive his way to victory.  But the Andore brothers did not go down without a fight; they made sure Haggar took his lumps until the very end.

The muscular mayor gritted his teeth and continued on, eager to see his mission through to the end.  He took down every punk and thug in his path until he got to the boss of that part of town -- Edi. E.  The cop-turned-Mad-Gear-thug laughed boisterously as Haggar charged forth, ready to teach the traitor a lesson!

But Edi. E. was ready.  He grabbed the foolish wrestler by his suspender strap and bludgeoned his ruggedly face with the butt of his night stick!  Four strikes was all it took for Haggar to utter his cry of defeat and collapse into the arms of the big boss!

"Night night," he grunted through a wide grin before slamming his fist into Haggar's face, knocking the hero into unconsciousness.


Haggar awoke some time later, groggy and disoriented.  His body had been stripped nude and he was laying upon a sturdy wood table.  He struggled to lift his arms, but they and his legs were secured tightly to the table by iron cuffs.  With what little strength he had left, Haggar tried to brute force his way out of his bondage.

He could hear the soft snickering of dozens of voices from somewhere around him.  He looked around, but the bright lights pointed at him blinded him to little more than his immediate surroundings.  The bodybuilding mayor was just about to bellow at his binders to free him when he heard a deep, gut-turning laughter among the spectators. 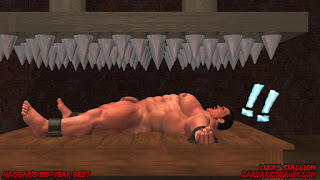 "Turn it on," that gruff voice then spoke through from somewhere in the darkness of the large brick-walled room.  Suddenly, Haggar heard the mechanical sound of a machine.  He looked upward and his face contorted into an expression of terror!  A massive compactor studded with large spikes was descending upon him!

Haggar shook his head quickly, desperate for an escape!  But there was no way out!  This was it!  Mad Gear had won!  He couldn't let it end this way -- he had to keep going, even if it meant throwing in the towel! 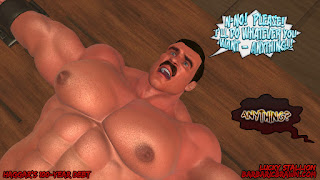 "N-No!" Haggar shouted to whoever it was who ordered the nefarious trap to be engaged!  "Please!  I'll do whatever you want -- ANYTHING!!"

"Anything?" his conqueror responded, an evil grin spreading quickly across his mouth.  With his nod, the trap was stopped, mere millimeters from piercing Haggar's skin.

Haggar, heart racing and lungs panting in fright, knew that even though he would live to see another day, his days of fighting Mad Gear were over.  Metro City was theirs to control, and Haggar's 100 years of servitude had just begun.

Click here to continue »
Posted by Lucky Stallion at 12:25 AM 20 comments

Hey, guys!  I wanted to make a quick post about my next project -- one that, like most strange and wonderful ideas, just sprang up spontaneously.  It's another Final Fight set starring Haggar.  I'm waist-deep in rendering, and I have two (maybe three!) extra bonuses I think you'll like!

Keep a look out for Haggar's 100-Year Debt coming soon!

Posted by Lucky Stallion at 4:19 AM 5 comments