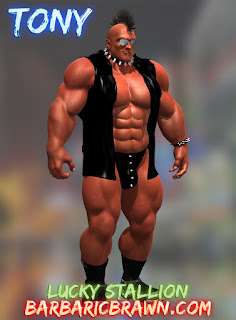 Many of them, blubbering and rosy-cheeked, are stripped of everything but their shoes and hats and hung by their jockstraps, inviting the other thugs of the mean streets to slap their bubble butts as much as they want.

But for a few of those officers of the law, their encounters with Tony aren't a one time thing.  Dressed as inconspicuously as possible, they go out into the dark alleys, hoping to find the mohawk-headed stud dressed in black leather.  Regular sex isn't enough for those poor cops anymore.  After Tony gets them on their knees, they just can't get hard anymore unless they're begging him for permission.
Posted by Lucky Stallion at 9:56 PM