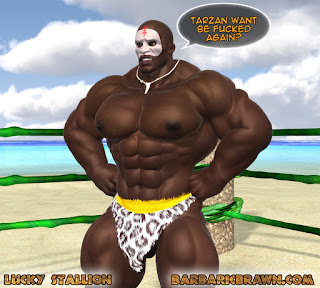 I wanted to go ahead and tease you guys with a small preview of my next story.  It's been a little over year since, but I'm returning to Tarzan and giving the jungle stud a sequel!

I've updated Jabari to version 2, giving him a fine-tuning in his facial structure and an overall skin refresh.  Having defeated Tarzan and taken his place as king of the jungle, Jabari now wears a big cat tooth necklace and a loincloth of rare snow leopard skins.

In this direct sequel to The New Jungle King, I'll explain what happened to Tarzan shortly after his defeat and the weeks that proceeded his dethroning at the hands of Jabari and the Mogu tribe.

Tarzan will once again meet Jabari in this wrestling ring of vines and stone and struggle to reclaim his crown from the new jungle king!  Keep a look out for more info!
Posted by Lucky Stallion at 11:56 PM