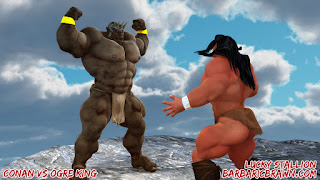 This is a short tale (and a bit darker than my usual stuff, be warned!) I made for this bit of practice I had earlier tonight!


Conan the Cimmerian stood atop the high cliff surrounded by the treacherous sea, facing off against the mighty Ogre King.  The beastly male raised his powerful, titanic arms in a display of raw masculinity.  The ogre was so mighty, even the barbarian felt a rare twinge of fear staring into the brute's ugly face.

Conan grabbed for his sword, ready to do battle with the Ogre King.  But with one swipe, the dark olive male knocked the trusty blade clean from the distracted barbarian's hand, sending it soaring over the edge of the cliff.  The sword clattered down the side and into the churning ocean, never to be seen again. 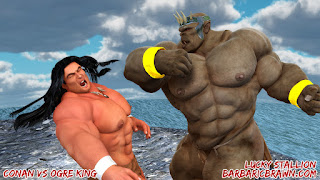 Male battled male for the pleasure of the gods, but only one would emerge victorious in this dangerous encounter.  Slowly but surely, the Ogre King landed more blows, and gained an advantage over the human -- an advantage that would hold until the very end.  Conan could maintain his offense no longer and was forced into defense.  A rumble of ogre pride sounded from the king's massive chest as the tide of battle turned his way.  His fists slammed into the barbarian's muscular body again and again, beating down his muscle and wearing away his ability to fight back.

Finally, with one last bone-shattering uppercut, Conan the barbarian was vanquished.  The human let out a mighty cry of defeat as he flew into the air and his body fell upon the hard, rocky clifftop.  The Ogre King uttered a low grumble of satisfaction.  Yet another man had fallen before his might.

Reaching down, the ogre made nude the barbarian, tearing away his loincloth, boots, necklace, and armbands.  These would suffice as his spoils of battle and would remain as treasures in his lair for all time. 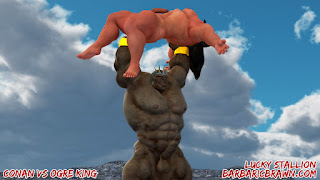 The barbarian lay still as his dominator lifted his totally nude body high into the air.  The king of the ogres roared his victory over the once-fearsome barbarian!  With one mighty effort, the ogre threw his conquered foe over the cliff and down into the raging waters below.

The gods, having greatly enjoyed the exciting battle provided unto them, blessed the Ogre King with the strength of Conan, giving the brute a boost to his own and elevating him to the undisputed, most powerful creature alive.

The Ogre King thrust his pecs toward the sky and grunted, feeling a new surge of strength flow into his burly muscles.  It was survival of the fittest and, yet again, the dominant stud overcame.  He was king.
Posted by Lucky Stallion at 9:00 PM