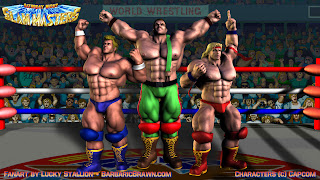 One of my favorite wrestling games is Saturday Night Slam Masters (also known as Muscle Bomber in Japan) from 1993.  And my two favorite wrestlers in that series are Biff Slamkovich (Aleksey Zalazof), in the red trunks, and Gunloc (Lucky Colt), in the blue trunks.

Then there's Haggar, the 309 lbs, 6' 7" tall stud from Final Fight fame.  He's always the character I play as when I'm itching for some Final Fight action.  As his profile from Slam Masters says, he likes to "pound" punks.  Indeed he does. *grin*

I made most of the props for these guys by hand, the most challenging of the lot being the knee pads.  And I used their default colorings from the first Slam Masters game -- though I have to admit, Biff looks damn sexy in pink.

I had made these models and this render about a month ago for fun, but decided to keep it off of the blog while I was busy working on and posting other things.
Posted by Lucky Stallion at 7:57 PM