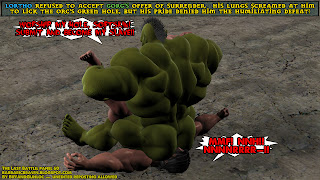 "WORSHIP MY HOLE, SOFTSKIN!" Gorg continued, flexing his butt cheeks around the human's face.  "SUBMIT AND BECOME MY SLAVE!!"

His lungs screamed at him to lick the orc's green hole, but his pride denied him the humiliating defeat!

With that, his oxygen supply depleted and he faded from consciousness.

Lortho was defeated.
Posted by Lucky Stallion at 12:52 PM